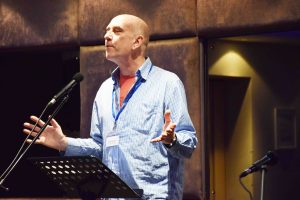 Andrew Gardiner was Minister at Hope Baptist Church in Plymouth for nearly 15 years.  Before that he had been Youth Minister at Mutley Baptist Church, also in Plymouth.  In May 2016, at the age of 57, Andrew was diagnosed with cancer.  This changed everything in, and around, his world overnight and he was dragged against his will into a place of darkness, fear, loss and confusion.  He was deeply frustrated and in turmoil at being snatched from his place of ministry which he absolutely loved!

In the two years that followed, Andrew found something amazing, that in the gloom and troubled time of suffering and horrible painful treatments, new and surprising things were revealed.  In the middle of the night on an oncology ward, God gave Andrew the words of a song True Identity.  A good friend of Andrew’s wrote the music and the song was released on CD.  God continued to inspire Andrew to write many other songs, several of these making the top three of the Christian music chart.  In addition to the songs, Andrew wrote many poems, some of which he had printed onto bookmarks, to encourage and inspire other people.  Andrew decided to call this ministry, Rising Hope.  It gave him the platform to talk about his faith to thousands of people, through the Rising Hope Facebook page, church services, radio interviews and two appearances on Songs of Praise.

Money made from the sale of CDs and bookmarks were put into a fund called Rising Hope Foundation.  In the 1990’s when Andrew worked as Youth Director for the local Baptist Association, he was frustrated at how little money was available to help young people be involved in mission and evangelism.  Andrew therefore decided that Rising Hope Foundation funds should be available to young people from the South West who want to step out in faith and serve God in making His name known.

Sadly in 2018, Andrew died.  He faced his two year battle with cancer with incredible courage and dignity.  His faith in God never wavered.  The songs and poems that he wrote and the testimonies and interviews that he gave, inspired many people.  In the months of his illness he also wrote a book, about his discovery, that in the darkest of places, you are never alone.  This book, entitled “The Tunnel” was completed by his family and has now been published with all profits going to the Rising Hope Foundation. Order a copy of the book here.

It is our hope that others will catch Andrew’s vision and through further sales of CDs and the book, young people will be enabled to make the gospel known throughout not only the South West, but throughout the world.

Rising Hope Ministry have produced Andrew’s Advent Poem on a bookmark which is available for purchase for just 30p from their website – great to give out to guests at church carol services! All proceeds from sales support,

This website uses cookies to improve your experience while you navigate through the website. Out of these cookies, the cookies that are categorized as necessary are stored on your browser as they are essential for the working of basic functionalities of the website. We also use third-party cookies that help us analyze and understand how you use this website. However, we only use these with your consent.
Necessary Always Enabled
Necessary cookies are absolutely essential for the website to function properly. This category only includes cookies that ensures basic functionalities and security features of the website. These cookies do not store any personal information.
Non-necessary
We like to use third party analytics applications (e.g. Google Analytics) to provide us with more information about how people are finding and using the site. This gathers information like country, browser, and which links you click on on the site. This helps us to develop the site to make it as accessible and easy to use as possible. All data is completely anonymised and cannot be used to identify you.
SAVE & ACCEPT