Watchet Music Festival was back for its twelfth annual event at the end of August and the weather was glorious! Over 8,000 people attended over the weekend with acts such as The Lightning Seeds, Sophie Ellis-Bextor and Hot Chocolate performing on the mainstage.

Alongside the music, traders and entertainments, the local churches team were also back hosting the Prayer Tent. This year the focus was the sea (which can be seen from the festival site) and as well as exploring the wonder of the oceans through artwork and a giant wave installation, there was also an opportunity to consider our own impact on the ‘blue planet’. The tent was open til 1am throughout the weekend and was visited by a steady stream of people of all ages. Some stopped to chat or debate, some shared their life story. Groups of teenagers found it ‘peaceful’ and families with young children turned plastic bottles into amazing sea creatures.

Worship and prayer played a key part in the weekend with the Prayer Tent team gathering for prayer every 3 hours and on Sunday morning leading the Festival Service in the ‘Udder Stage’ big top. Worship was led by a band made up of young people from the local churches with Rev Clive Gilbert, Vicar of Watchet & Williton, bringing a message of hope in troubled times and Mike Sherburn, Watchet Baptist Pastor leading prayers for ourselves and our world.

Go Team Adviser and partner of Watchet Baptist Church, Andy Levett, who helped lead the team commented: “An amazing weekend on top of the hill! So many conversations, highlights and stories to share and such a privilege to be involved in the festival in this way.”

“This year we were billed in the programme and even on the t-shirt as ‘We Are The Church’ which probably says it all. Great to be a part of bringing churches together to pray and serve this amazing local event.”

This poem was written for the Festival Service by university student Lucy Sherburn who was part of the Watchet Baptist Church team.

Today we pray for your hand on the festival
The sound, the lights, the fun
But we also pray for your creation
And it's protection when the partying's done." 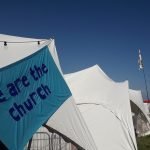 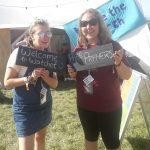 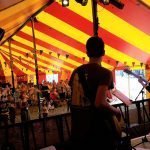 This website uses cookies to improve your experience while you navigate through the website. Out of these cookies, the cookies that are categorized as necessary are stored on your browser as they are essential for the working of basic functionalities of the website. We also use third-party cookies that help us analyze and understand how you use this website. However, we only use these with your consent.
Necessary Always Enabled
Necessary cookies are absolutely essential for the website to function properly. This category only includes cookies that ensures basic functionalities and security features of the website. These cookies do not store any personal information.
Non-necessary
We like to use third party analytics applications (e.g. Google Analytics) to provide us with more information about how people are finding and using the site. This gathers information like country, browser, and which links you click on on the site. This helps us to develop the site to make it as accessible and easy to use as possible. All data is completely anonymised and cannot be used to identify you.
SAVE & ACCEPT